When I began blogging a year ago the last thing I expected was to receive any free beer.  If my writings help anyone try a new beer or explore a new pub from my recommendations then that is reward enough.  However, when a package of beer gets delivered to your home it would be rude to send it back.  The only thing to do is to drink it and write about it.

When I visited Norwich City of Ale back in May the festival coincided with the rebirth of the Lacons name.  Lacons was a victim of a time when Whitbreads were embarking on a destructive tour of Britain by buying up and closing many local breweries.  It is 45 years since the Lacons name disappeared but the name has now been revived and the falcon logo has been modernised and is flying once more.

I said a few kind words in my blog post of my visit to Norwich concerning the Lacons launch.  Both myself and my two friends thought their Encore (3.8% ABV) was the best beer of the weekend.  The Legacy (4.4% ABV) was enjoyed by one of my friends too so I was delighted to receive this package of the three Lacons beers to enjoy.  Time to panic though.  What if I don't like them?  A comment of 'thanks for the beers you sent but they were truly awful' would not go down too well.  Oh well.  Here goes.

I tried them in the correct order (increasing strength) so the first one was the Encore.  This was the only beer of the weekend in Norwich that received my gold award.  The bottled version has the same delightful citrussy aroma.  The flavour of those citra hops are a joy which impart an immediate hit of grapefruit.  It is soon balanced by a little lemon and some earthiness.  The cask version had a long dry finish but I found the bottled version to be more mellow and restrained.  A lovely refreshing beer.  Score 9/10. 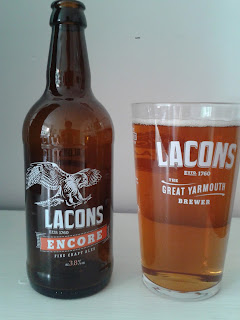 The Legacy (4.4% ABV) came next.  As you can see this is a much paler beer and the citrussy flavours are slightly different.  The grapefruit notes are replaced my a more lemony hit with hints of elderflower there too.  It has a more earthy taste to it which was extremely pleasant.  I found it to be a little drier in the finish than the Encore with less bitterness.  This would be an awesome cask beer and this bottled version gets a score of 8/10.    ﻿ 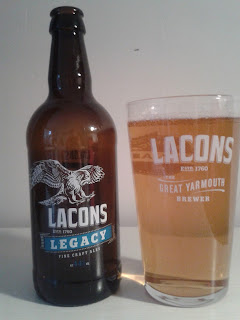 The Affinity (4.8% ABV) is the one beer I was yet to try in the Lacons range.  The appearance is of a more traditional English bitter with a darker chestnut colour.  It is much more complex with little aroma.  The initial taste is of a richer fruit flavour with hints of mango and passion fruit.  There was a little spiciness which gave it an interesting twist.  It was very smooth with a fruity bitter finish.  My wife is not a fan of the modern citrussy beers and so this one was her favourite.  For me it receives the lowest score of 7/10 but this is simply down to personal taste.  It is still a lovely interesting beer. 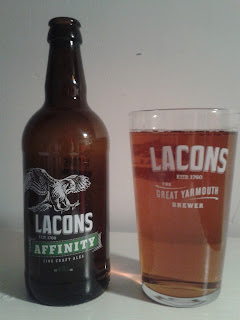 So Lacons Ales of Great Yarmouth are flying high again and this falcon will hopefully continue to soar to great heights once more.  The three beers have a range of strengths but I would probably have found it difficult to determine these strengths from the taste.  With a blind tasting I would probably have guessed that all three were around the 4.2 - 4.4% ABV mark.  The Encore has a superb full flavour for a 3.8% beer whereas I found the Affinity to not quite offer the richness of a 4.8% beer.  For anyone visiting the Norfolk coast this Summer these are three beers you should hunt down and consume.  I will have to hope that they begin to make their way a great deal further south.