Another Meet the Brewer event at the fabulous Craven Arms, Birmingham was held on Monday evening.  The star of the show was Andy Parker, brewer and owner of Elusive Brewing based in Finchampstead, Berkshire.  They are close enough to Siren Craft, that they can smell each others hops and it sounds like they have been a great help to Andy too along the way.  In fact they have done many collaborations prior to Andy getting his own brewery operational, particularly with Siren's 'Dinner For' series of beers. 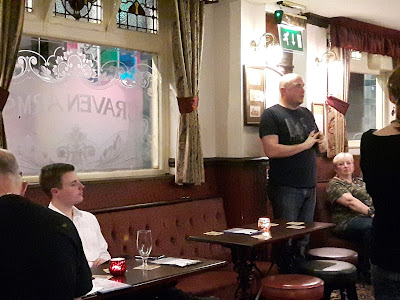 It seems that Andy's fame and stature was already legendary when Elusive began.  It is hard to believe he only began home brewing in 2012 and within two years he had been crowned National Homebrew Champion netting himself a £5000 prize.  Since then he has made numerous collaborations notably with Weird Beard and Siren before embarking on his own brewery, a 6 bbl set-up which produced beer number one in April.  He says he is risk averse and it was his wife who gave him the kick up the butt to give up the day-job.  And, of course, the thing he misses most about his job is the salary!!!  The brewery is now a true family affair with his recently-retired parents helping out.

Many questions were asked and one which always comes up at any MTB is where did the name come from.  Andy is into gaming and he wanted his gaming tag to be Elusive.  As is often the way with these things the name he wanted was already taken.  In the end he looked at words for Elusive in foreign languages.  His gaming tag became tabamatu which is Elusive in Estonian.  That also became his Twitter id so when he was seeking a name for his brewery it had to be Elusive (Tabamatu wouldn't have worked quite so well I think).

The bar at the Craven Arms was loaded with Elusive beers.  The first one I tried was Level Up (Level 3: Colombus & T'n'T) - 5.0% ABV.  I love good hoppy reds and this is one of them.  This was the beer which won him the National Homebrew Champion crown (albeit with different hops).  Andy was keen to point out that he is keen on marrying malt and hops in a way which provides excellent balance and that is certainly the case because the flavours of both shine through in all of his beers.

The second beer I tried was Carve'n Yams (5.2% ABV).  The name was a clever play on the name of the pub of course as this was the only cask of this beer available anywhere and, although it is a pumpkin beer, I particularly enjoyed this one.  It was a pumpkin porter with a dash of cinnamon and nutmeg but ultimately it was a smooth porter full of flavour and character.

There were three evil keg beers alongside the six casks and it was time I dabbled in one of those.  Spectres' Lair was a fabulous 4.9% ABV APA with lovely grapefruit notes coming through.  That was it for the evil keg though for the night as far as I was concerned.  The next beer was a full pint of Brimful of Masha (7.2% ABV), a beer that was only available on cask here tonight.  This is a beer that has appeared in all the Brewdog bars recently in keg and Andy told me how different it was here tonight.  I absolutely loved it.  My favourite beer of the evening.  It is another American red ale and it had so many flavours combining to give a beer of perfect balance.

My final beer was Ultrahops Vienna (4.8% ABV).  This was a pale ale that I should really have had earlier in the evening because it was a beer with plenty of lighter tones but the quality still shone through.  It is rare to go through such a range of beers from a brewery that is still so new but that was the reality of the evening I experienced here.  Every beer was superb and I cannot wait to see what gems Andy will come up with in the future (something special for Yapton Beerex hopefully !!)

Thank you once again to Chris and Sharon, the wonderful hosts at the Craven Arms, along with Tim Rowe, the events organiser for this wonderful pub.  Sadly I cannot make the next event (Lost & Grounded on Monday November 7th) but I will definitely be along later in the week to sample some of their beers if any are left.  I know that Tim is only interested in inviting quality brewers to these events so the beer will definitely be first class.