All roads and train tracks led to Birmingham last night for those who appreciate the excellence of Marble beers.  Birmingham's top real ale pub, the Craven Arms, were throwing another 'Meet the Brewer' event and the star of the show this time was James Kemp, head brewer at Manchester's finest.  I love these type of events and I had this one in my diary since it was announced.


Things took an unexpected turn which made it even better.  A former work colleague of mine, John Goodsell, has recently begun getting involved with North Sussex CAMRA doing their social media stuff.  Through this involvement we got back in touch with each other via Facebook but apart from a brief chat at a GBBF quite a few years ago we hadn't seen each other for 25 years - until last night.  He put out a comment on Facebook to say he was in Birmingham for the evening and asking for recommendations.  He did not take any persuading to join me at the Craven when I told him it was a Marble Meet the Brewer.


The bar was loaded with Marble beers.  Six cask, six keg and a sprinkling of bottled beers.  A few of these were the same beer so it was possible to compare and contrast the two methods of dispense.  I didn't double up though as there were plenty of beers I wanted to try.  I began on the first line of three casks beers shown below. 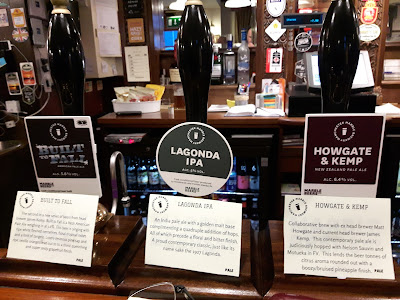 The first was Built to Fall (5.6% ABV).  This APA was delicious with a full citrus hit.  I had time to drink this one and fill my glass with the Howgate & Kemp (6.4% ABV) before things began.  This beer turned out to be my favourite one of the evening with a real hit of pineapple from the New Zealand hops.


Whilst supping I was enjoying listening to Black Sabbath's 'Into The Void' when suddenly the volume went up and the lights went out.  This sudden upping in the volume did not last long as the sound was soon extinguished and the lights came back on.  Tim Rowe, the organiser of these events, stood up and introduced James.  James gave us a brief history of his brewing career before joining Marble at the end of last year.  Born in the UK, a move to New Zealand, learning the art of home-brewing and picking up a strange accent, coming back to the UK and working at Thornbridge, Buxton and Fullers.  Then getting the call from Marble to take on the role of head brewer.


It was then time to try more beer.  I went for the Earl Grey IPA next (6.8% ABV).  I had tried this once in the Marble Arch a couple of years ago but this tasted much better than I remembered it.  I am not a tea drinker and to be honest I did not notice any earl grey flavours in there unlike other 'tea' beers I have tried.  It was just the kind of big bold IPA that I love.


By now John had arrived and he was catching up quickly with pints whereas I was on halves.  Next up for me was my first keg beer of the evening, Skiffie Worlds (5.0% ABV), yet another IPA.  Marble love brewing IPAs.  This one lacked the flavour of the others so I followed this up with the Lagonda IPA (5.0% ABV), one of my favourite Marble beers, and this was in perfect condition.  As good as I remember it.


Whilst all this drinking was going on me and John were catching up on the last 25 years.  Working in IT and drinking good beer seems to go hand-in-hand.  It certainly does for us.  In the meantime James was circulating with Tim and it was good to chat with them when they got to us.  John had missed the earlier talk so I introduced him and we had a good chat about Harveys and old ales, a beer style popular in Sussex and one which James is keen to brew based on the fabulous Gales Prize Old Ale which we all have fond memories of. 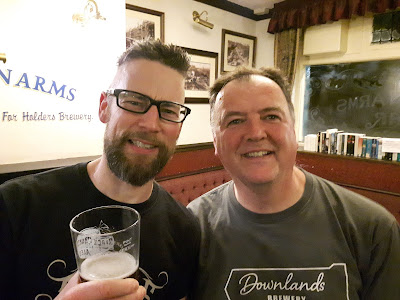 Marble celebrate their 21st birthday next year and many new beers are planned but it was refreshing to hear that Marble have no intention of expanding.  They are happy being the size they are and world domination is not part of the plan.  Also not part of the plan though is Dobber.  This beer has been consigned to the history books it seems.  I will mourn its loss.


The evening then took another unexpected turn.  Tim had a 10-year old bottle of a Marble imperial stout called Decadence and he got some sample glasses for us and offered it round.  This was sensational with a capital "S".  A definite advert for aging beers.  I just can't seem to keep mine long enough though.  Lots of chocolatey notes and a great boozy character to it. 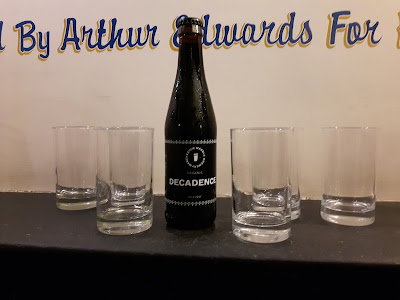 After that my last train was calling me but there was time for yet another superb APA, Damage Plan (7.1% ABV).  This is another beer that I have tried before and it didn't disappoint.


I would like to thank Tim for organising these events, the Craven Arms for hosting them (and for being the best real ale pub I have ever been in) and to James for his engaging manner and brewing expertise.  Finally to John for joining me and hopefully it won't be quite so long before we meet up again.  Next month's Elusive meet the brewer perhaps?