It's been a long time since I posted anything and there are a number of reasons behind that.  The main one is work related which I can't go into but the whole situation is totally depressing.  On a more positive note there has also been a holiday to New England which I will write about shortly.  That was one big hop fest!!


This week I ventured over to Worthing again because it has a new craft beer bar that I wanted to check out.  My thoughts regarding the best pubs in Worthing which I posted about earlier this year (click here to read that) have not been changed by this visit. The guy behind the wonderful Wandering Goose, reviewed in the aforementioned post, is also behind this new bar.  He is obviously aiming it at a totally different clientele.


The Libertine is located more centrally in Portland Street about half a mile from the seafront.  This makes it more convenient for the train station but in future I will take the longer walk to the Wandering Goose.  The bar is cavernous with lots of floor space and presumably there will be music nights to take advantage of this.  There are large chunky wooden tables, large chunky wooden benches and plenty of wood on the walls, floors and ceilings too.  Generally it has a modern and appealing look.  Each table has a gin menu listing 40+ gins.  Each table also has a candle to compensate for the low lighting although there is plenty of natural light from the large windows before the sun sets. 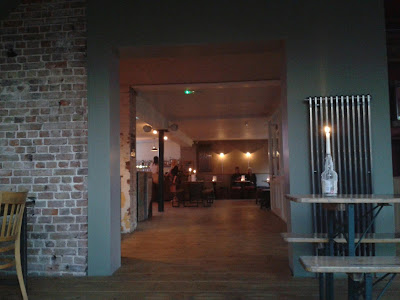 What I was interested in was the beer list of course.  The Wandering Goose has a great selection of craft keg beers as well as a couple of craft real ales on handpump.  Here there are no handpumps and the craft keg selection could have come right out of the Wandering Goose.  I had a superb Old Ford Export Stout from Redchurch, a not so impressive session IPA from Bear Hug and a decent Easy IPA from Flying Dog.  Most of the beers available were from London brewers.  Meantime, Camden, London Fields, Portobello were all in evidence which is OK.  From further afield, Thornbridge Jaipur was also available.  If I had gone to the Wandering Goose I may well have seen the exact same selection though.  Therefore it all comes down to the type of bar a person prefers.  My guess is that anyone who enjoys the small cosy intimate nature of the Wandering Goose will not be swapping that for the Libertine.  The Libertine will attract a younger person and may therefore not get the same crowd looking for craft beers.
I left The Libertine thinking that while it is an interesting addition to the Worthing scene it will not be a place I will rush to visit again.  Don't get me wrong.  There's nothing I particularly disliked about this place.  The piped music was definitely to my taste and so was the beer.  It was quiet though and when it is full of younger people downing gin I think it would resemble my idea of hell.  However, if it gets the younger clientele trying and enjoying craft beer then that can only be a good thing.  How many of them will want to savour a 7.5% export stout in preference to gin or one of their lagers though is questionable.  It will be interesting to see if their beer range changes over time and away from the sort of offerings you get at the Wandering Goose.
After The Libertine there was still time to visit the Brooksteed Alehouse of course where I felt much more at home.  Nick and Paula were recovering from their first birthday celebrations.  They had a fabulous selection of 8 ales on over the weekend and there was still some left.  The Hastings Breakfast Porter was OK without hitting the heights of some of their other beers.  The Gyle 59 Pale and Bitter was as good as you would expect from this excellent Dorset brewer.  Overall it was a very pleasant evening.