On Saturday it was my very great pleasure to visit Downlands Brewery.  They are tucked away on an industrial estate in the village of Small Dole just outside the area of the South Downs National Park.  I was part of the Western Sussex CAMRA branch that had invited themselves to make a presentation to the brewery and the three man team at Downlands were there to welcome us.  Pictured below from left to right we have Widdi, Ian and David and they are living proof that brewers are the nicest people you could wish to meet. 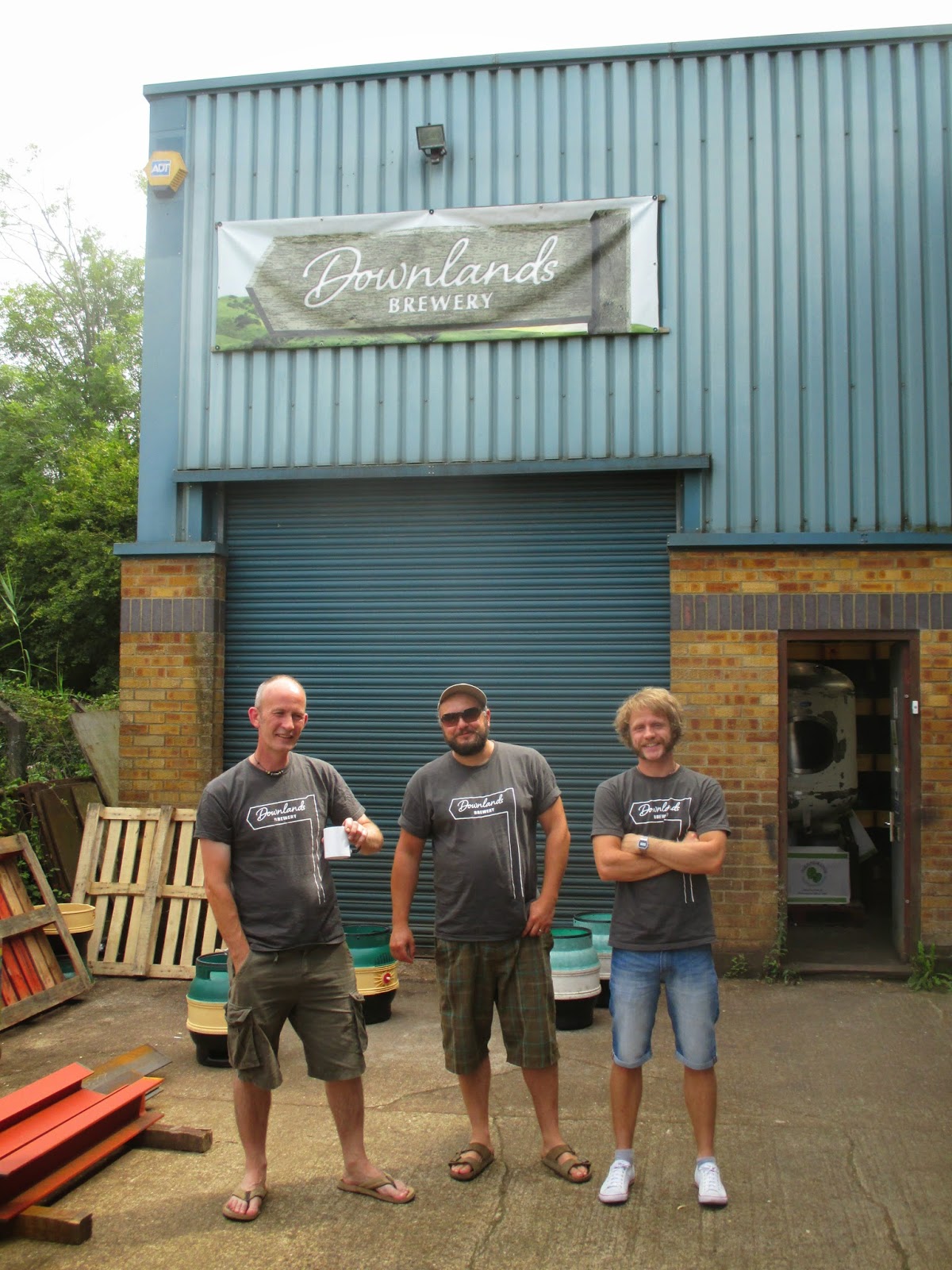 Upon entering the brewery you make the walk of pumpclips.  The narrow passage that leads to the room below where all the action takes place is lined with the clips of all their beers that they have produced since their inception a couple of years ago.  The 10 bbl brewery is compact with a single mash tun and three fermenting tanks.  After a brief chat about the brewery and what every vessel was used for it was time to sample some of their products. 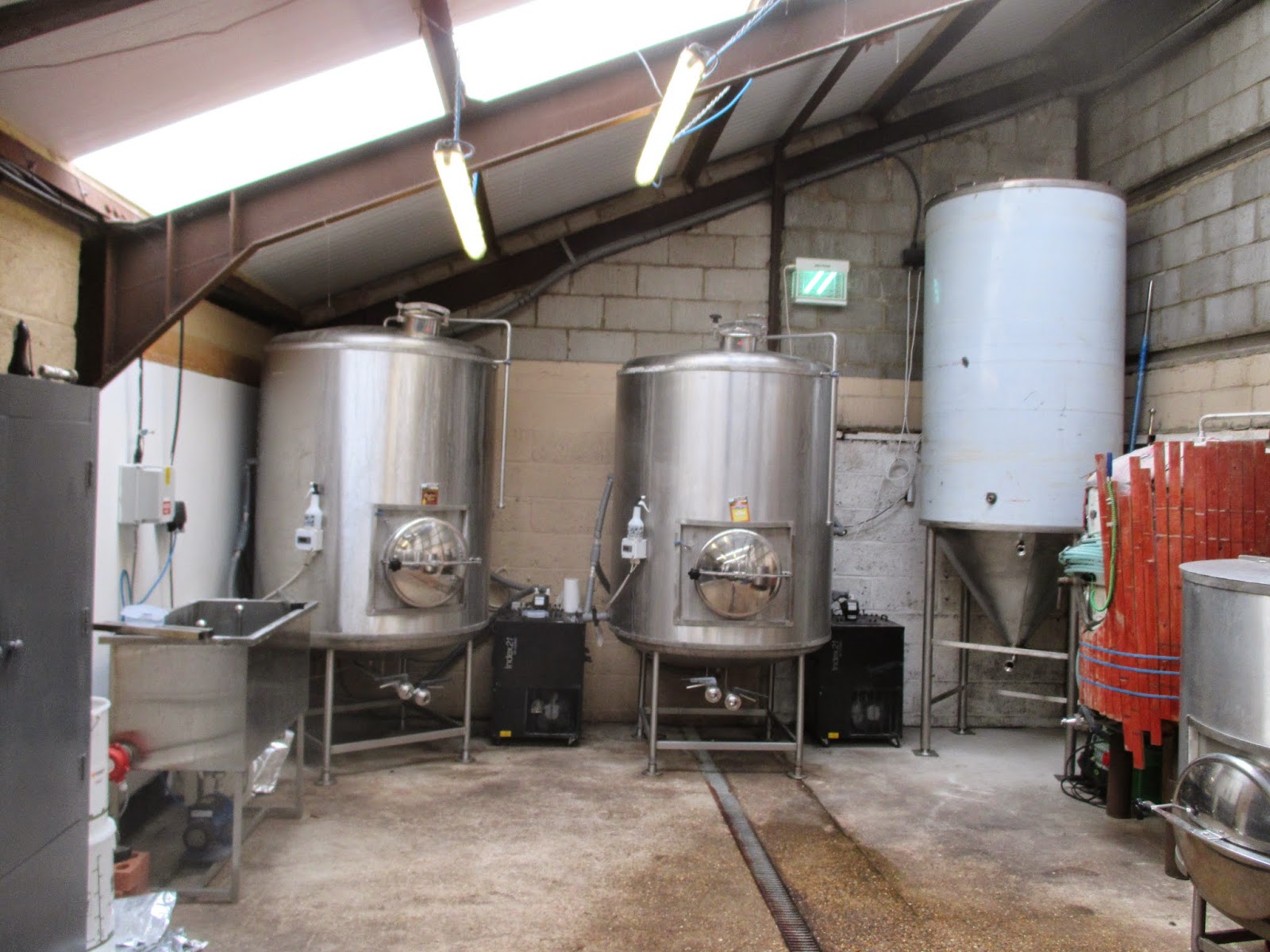 I began with their new product, a 4.5% black pale ale with the name 'a darker shade of Pale'.  This is generously hopped with an assortment of the best American hops and the aroma from these was very powerful.  They were very well balanced though by a lovely smooth biscuity malt character.  I still find black hoppy beers hard to adjust to as the aroma comes from the hops but the malt character comes through with the taste and so my brain gets confused as these two senses are telling it different things.  This is a fine example of this style of beer though. 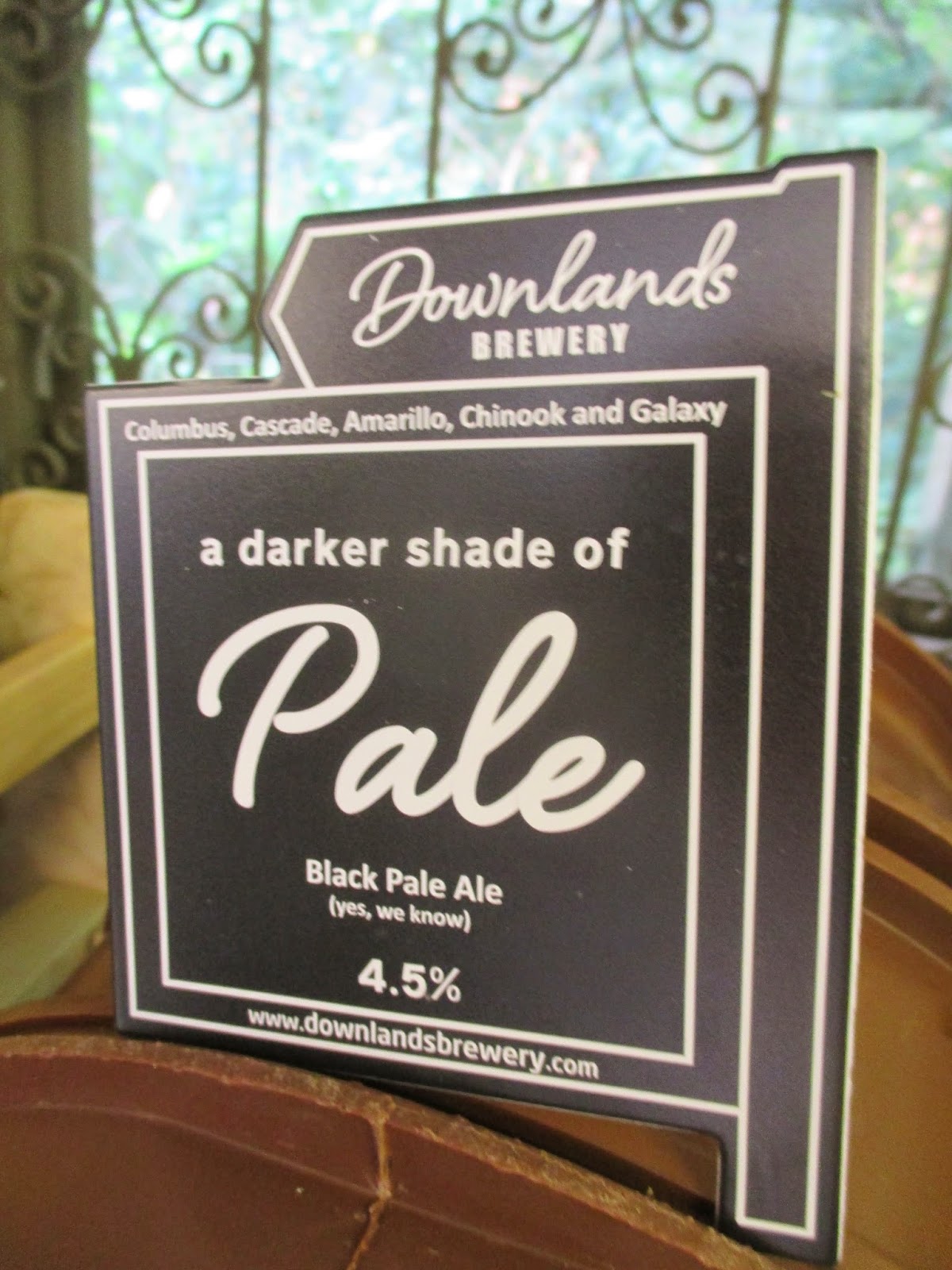 My second beer offered up more confusion to my poor brain.  This time it was the 4.7% ABV APA (Anglo Pale Ale) described as an American style pale ale with British ingredients.  This beer was well hopped too but with traditional British hops so there was none of the tropical fruit sweetness you get with a typical APA but rather a more earthy fruity bitterness with a long dry finish to it.  It is another fine beer 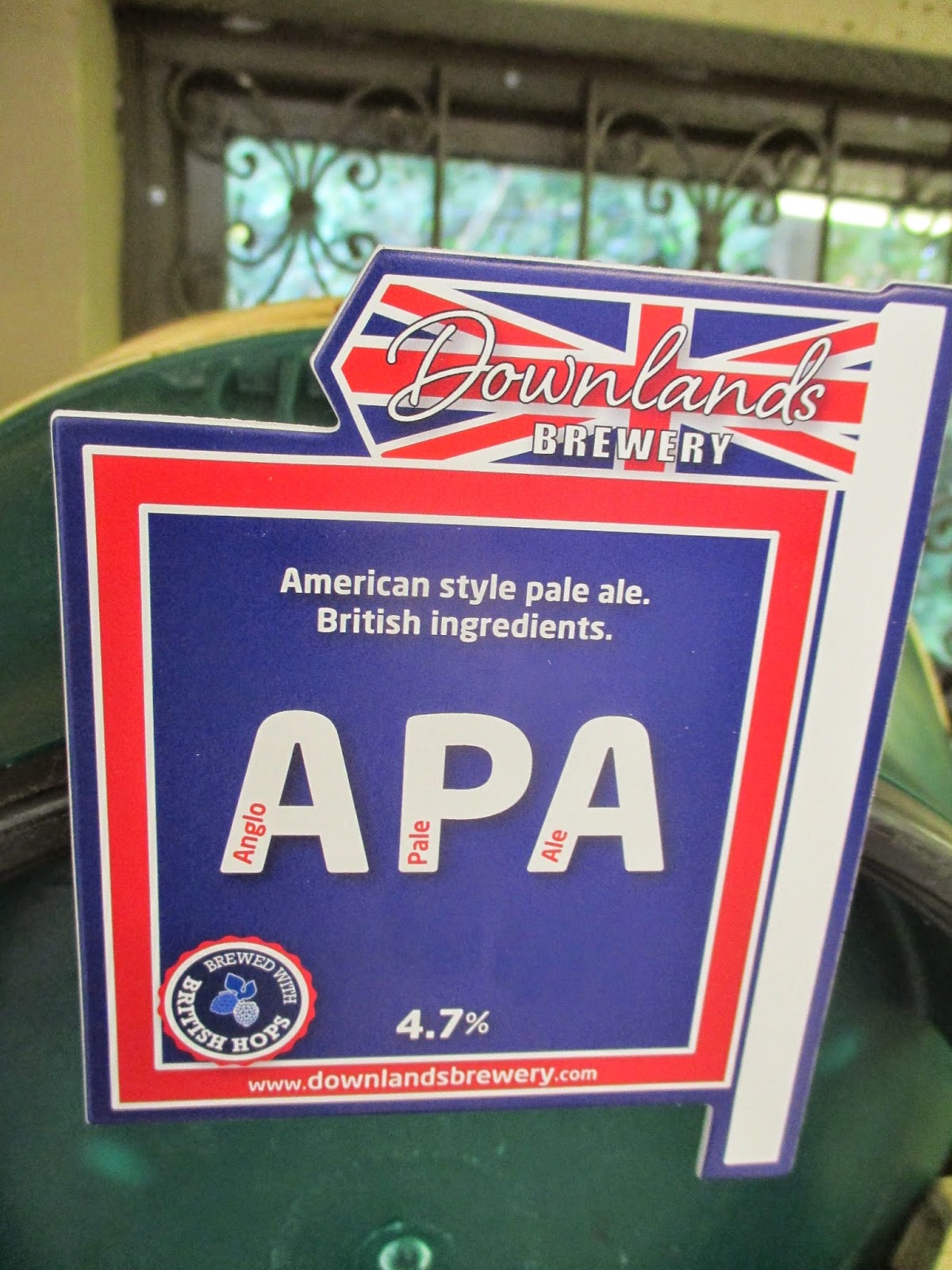 The general purpose of this visit was to present the guys at Downlands with their certificate for winning the beer of the festival at the Yapton Beerex which my local CAMRA branch holds each May.  Their 5.0% Devils Dyke Honey Porter took first place against some very stiff competition from breweries all over the country including Tiny Rebel and Magic Rock.  It was therefore time to try this beer as the presentation was about to be made. 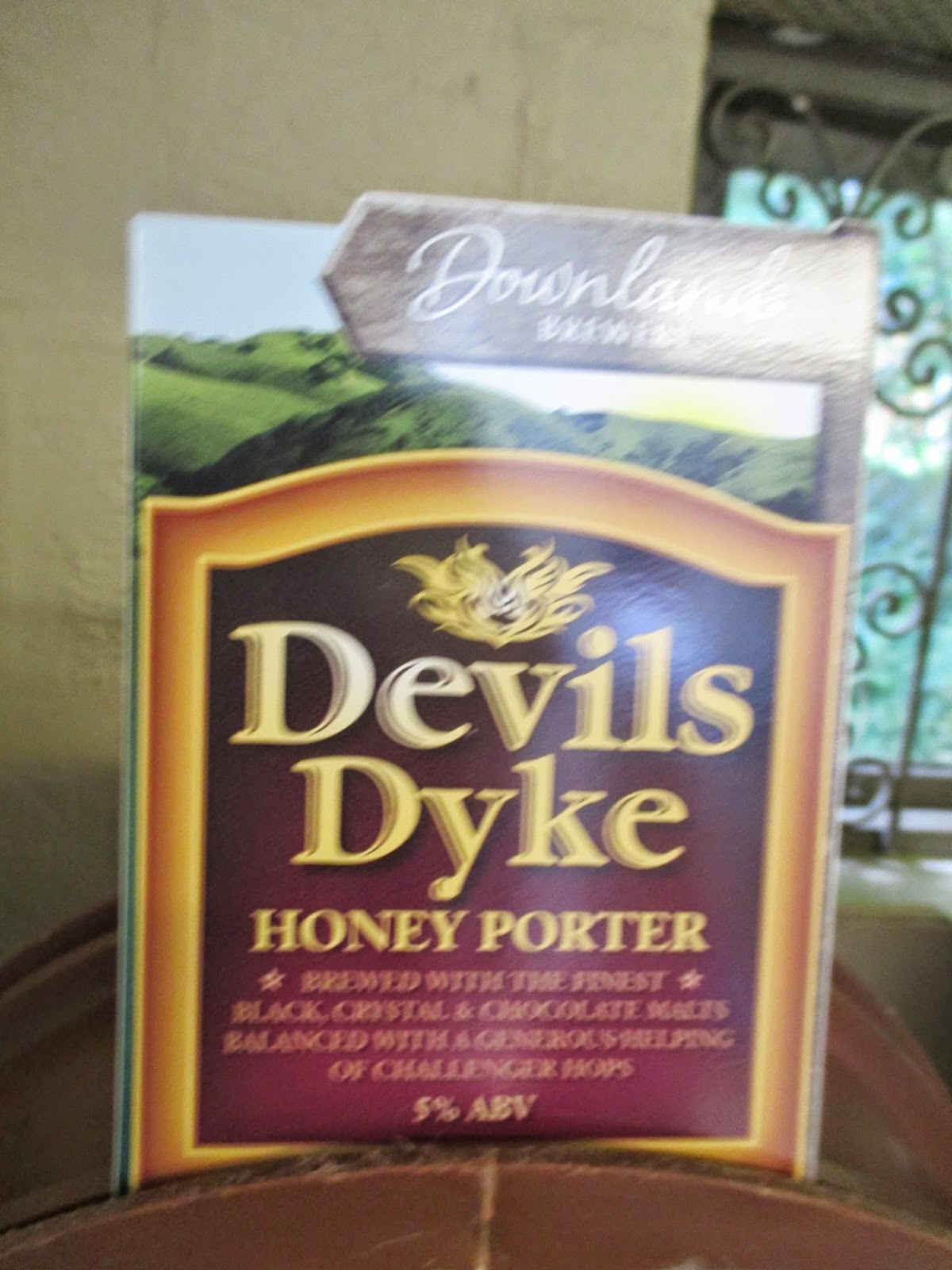 Head Brewer Widdi was on hand to receive the award from our branch chairman Phil Wildsmith.  Widdi was honest enough to admit it isn't his favourite beer but as our chairman pointed out, it goes against the perceived notion that strong dark beers will only sell in the winter months when such a beer will not only sell but is also widely enjoyed at a beer festival held over a particularly hot weekend in May.  The beer itself is a version of their lovely Devils Dyke Porter but with a dash of honey added to it.  This adds a sweetness to balance the chocolatey roasted malt character of the former and I confess to being quite a fan of it as the balance is pretty much spot on with not too much sweetness coming through to overpower it. 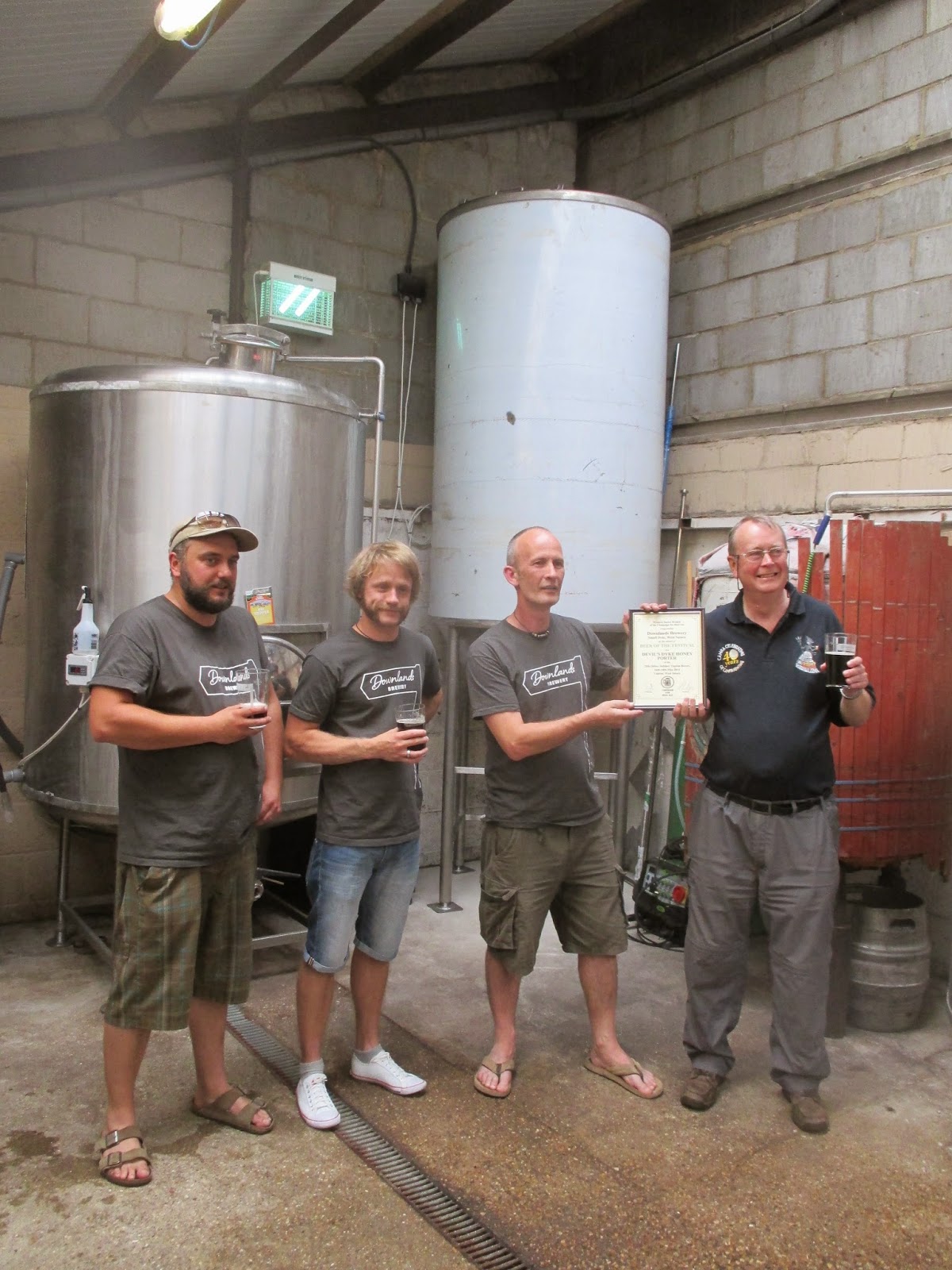 The beer is obviously proving popular as this is the second award it has won recently but I'm sure Widdi and the guys would love an award for one of their favourites next but for now it seems they are going to have to continue brewing it. 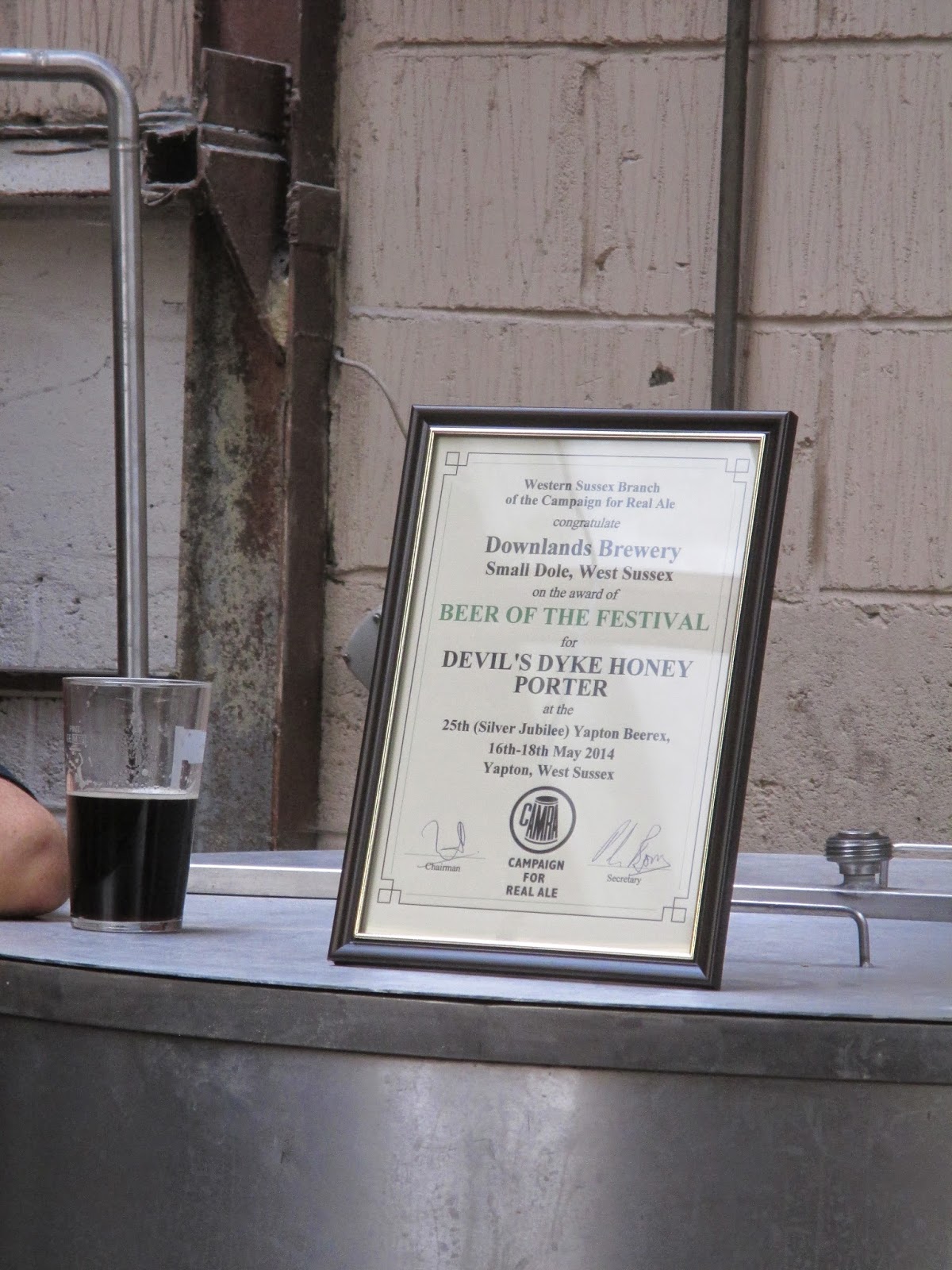 After the award had been given and gratefully received there was time to sample a couple of beers that are similar except for the hops used.  Pele (4.1% ABV) is a version of their Pale that was brewed for the World Cup last month and the hops in this one were the big 'C' hops from the US - Comet, Chinook, Cascade and Colombus.  This is a fantastic beer and it was my favourite of the day.  Once I saw the list of hops I knew I would be a happy man.  Lots of tropical fruit character in both the aroma and the flavour that I have come to love over recent years. 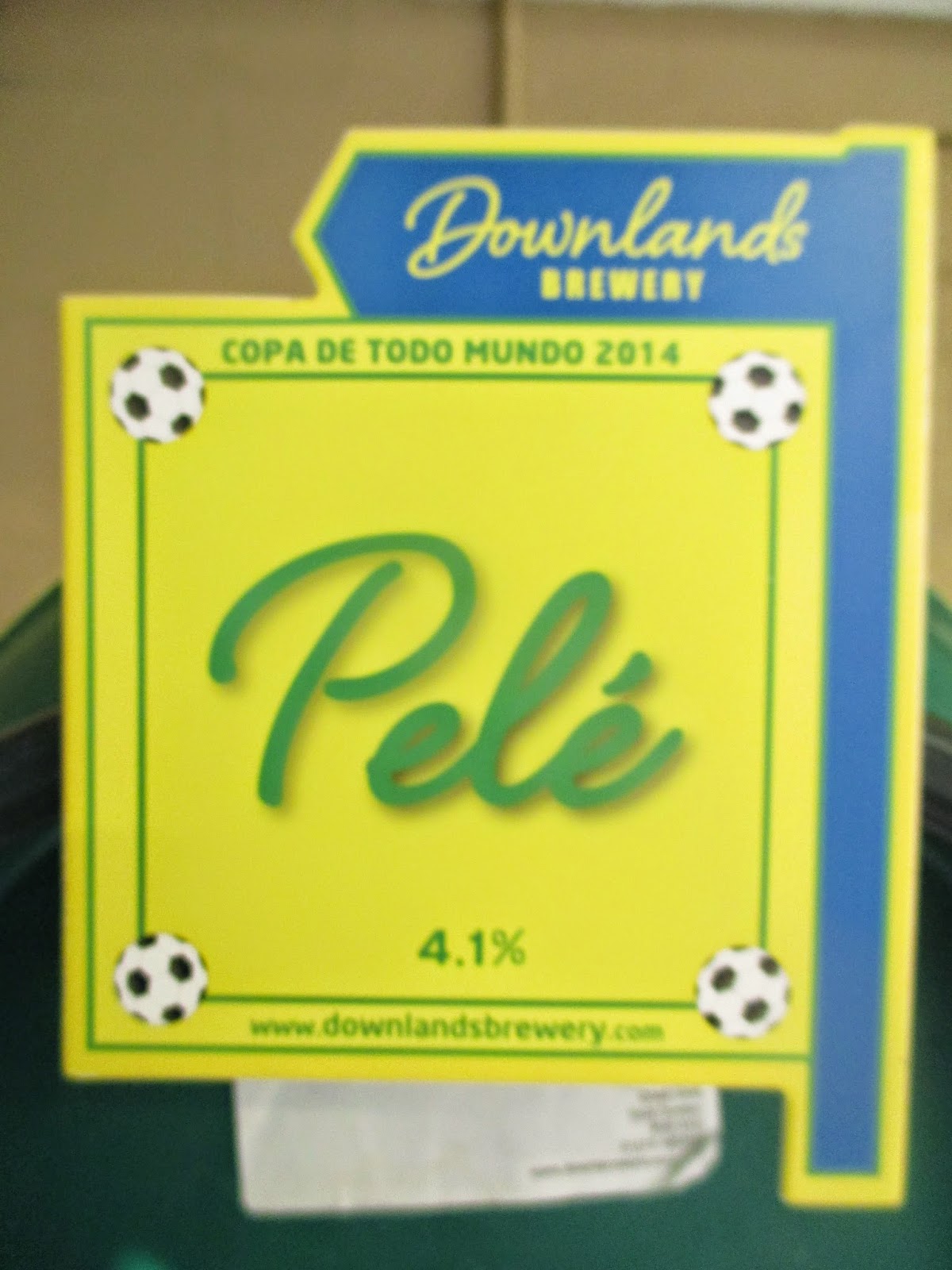 I finished off with the current version of the Pale (4.1% ABV).  I say current because the hops in this beer are often changed from brew to brew and this particular one had a couple of New Zealand hops I believe if my memory is correct after all this beer.  It is a beautifully balanced straw coloured ale that I have previously enjoyed in local pubs.  It has a lovely crisp bitterness with a dry bitter finish. 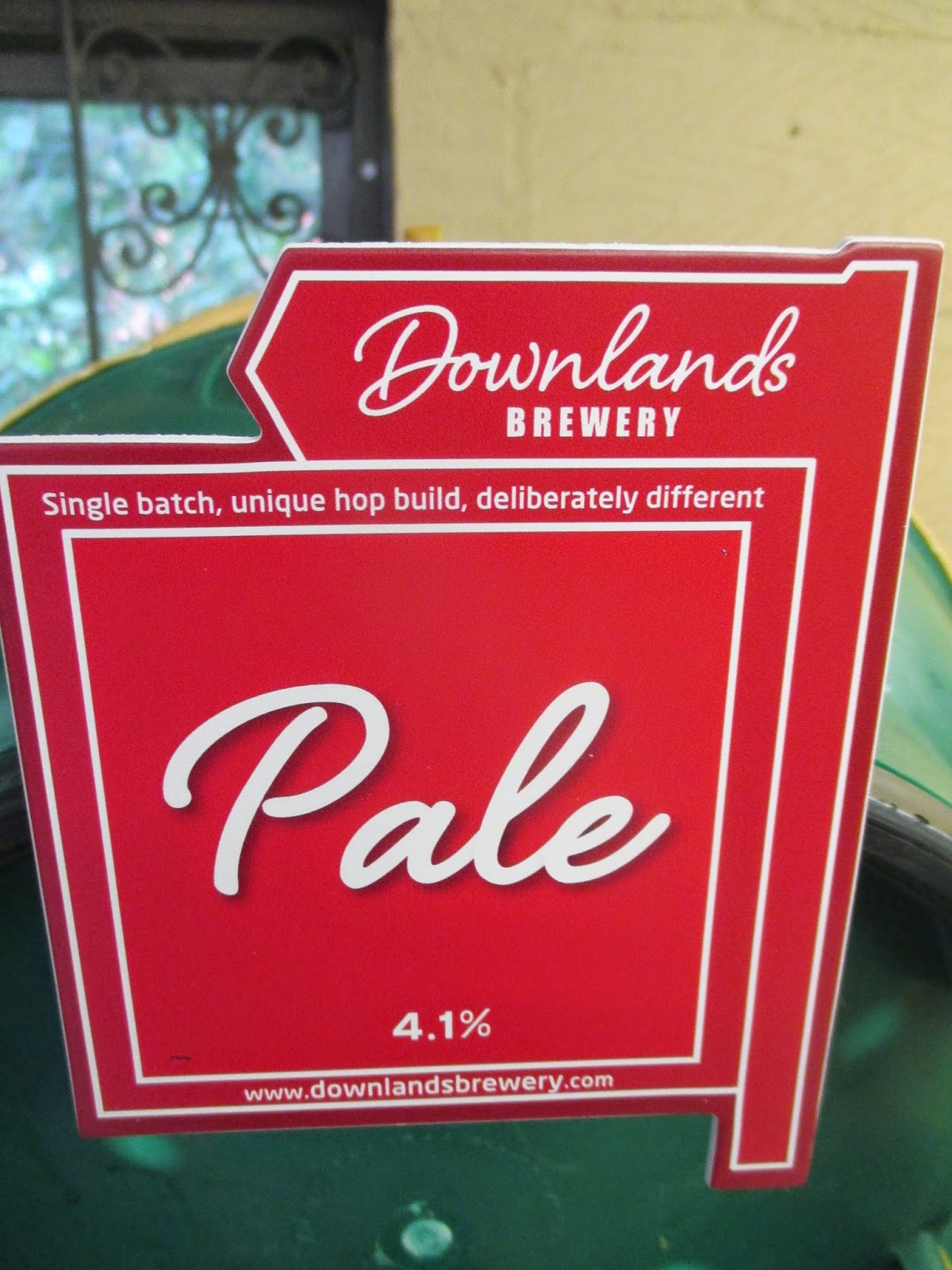 It was time to say goodbye to our hosts and catch the bus back into Shoreham where I had time for a pint at the excellent Duke of Wellington.  The pub was hosting a Brodie's tap takeover later that evening and some of my CAMRA colleagues were remaining for that event.  I had time for a pint of Beach Head Original Ale (4.5% ABV) which was a pleasant best bitter but after the hopfest I had been enjoying earlier it was a bit average. 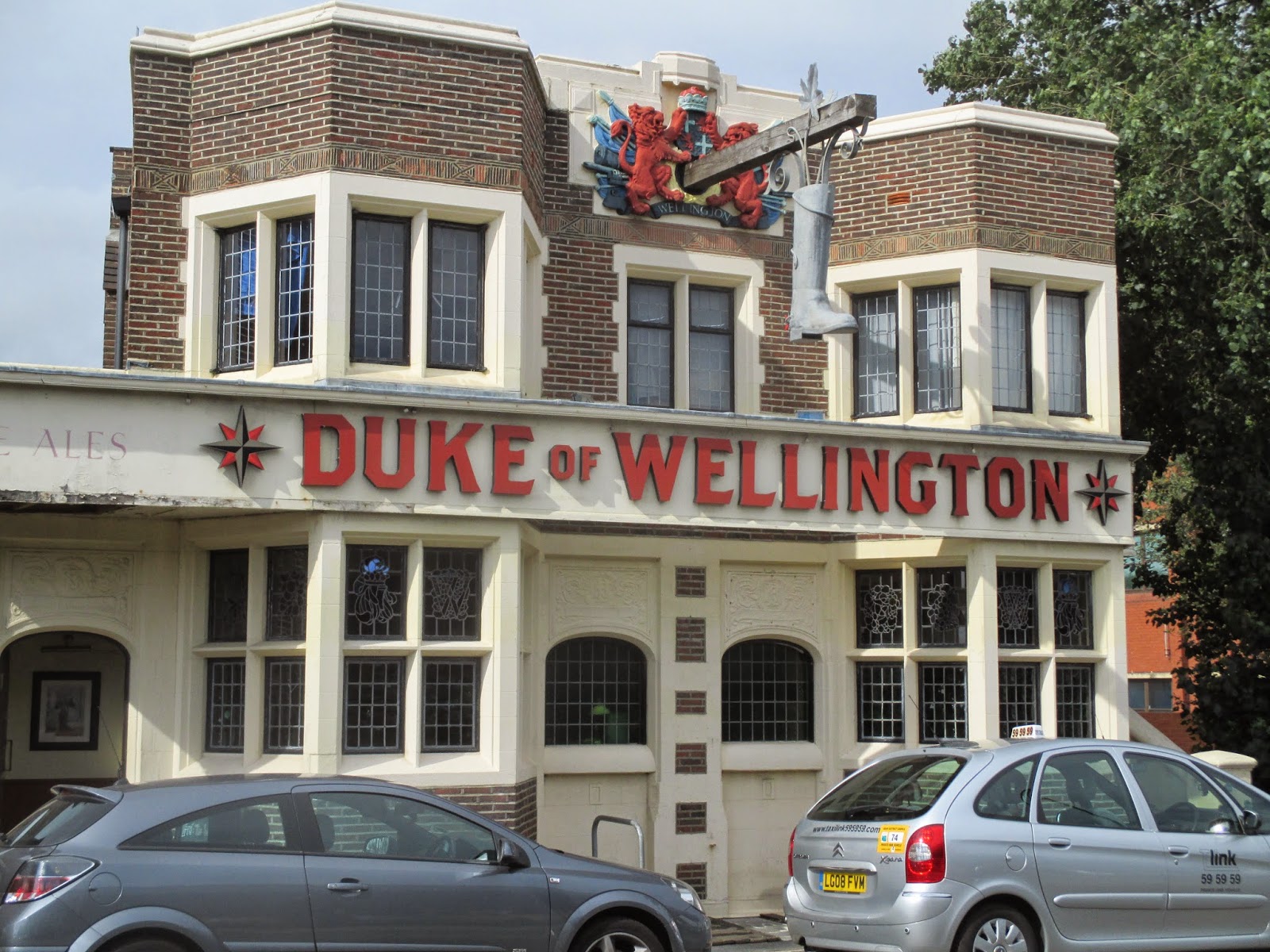 Downlands brewery are living proof that the beer world is full of friendly brewers enjoying their craft.  Their reward comes when their labours are honoured by the general public appreciating their endeavours and that is what Saturday was all about.  The beer of the festival at Yapton Beerex is not decided by the local CAMRA branch but is voted for by all those that attend.  It is therefore always a pleasure to attend these award presentations and to sample the beer in the brewery where it is made.  My sincere thanks go to Widdi, David and Ian and I will continue to look for their beers when I am out drinking.