The problem with beer reviewing is how to make it interesting in some way so faced with 20+ beers I tried to come up with something different and being the competitive type I hit on the idea of reviewing a different brewery each week.  This was helped by the fact that I had ordered three beers from most of the breweries I wanted to try.  To make it a little different I would award a mark for each brewery based on their appeal with regards to their labelling and branding too so the final score would be a mark out of 40.
I began my journey across Yorkshire in the famous rugby league town of Castleford.  I'm old enough to remember watching Floodlit Rugby League on BBC2 every Tuesday evening.  Never understood what the hell was going on but Eddie Waring always made it sound exciting.  Revolutions Brewing Company began brewing in 2010 and their beers pay homage to music from the 70s and 80s rather than rugby league however.  I have never tried any beer from this brewer before so here we go.

All of the beer strengths relate to music as it used to be played on cassette or record and this is the first of two 45rpm beers I picked up.  Blondie were huge in the 1970s and I loved them although Atomic was pretty dire.  The beer is a golden pale ale but they haven't quite made it magnificent.  There are plenty of citrussy lemon notes and a nice gentle dry bitter finish with some soft floral notes.  It is very crisp and refreshing but for me there is not enough bitterness in there.  A perfectly fine session ale for the spring or summer months though and it gets a 6/10 from me.  My wife described this one as 'bland'. 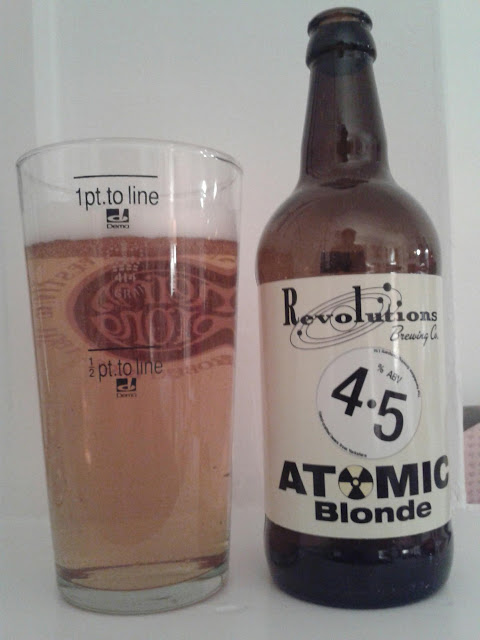 'The ice age is coming, the sun's zooming in,
Meltdown expected, the wheat is growing thin,
Engines stop running, but I have no fear,
'Cause London is drowning, and I live by the river'

London Calling is still one of my favourite albums of all time and certainly the best album to come out of the punk revolution.  Like the album, the beer is moreish and complex.  My wife only gets one sip and it gets a 'not great' verdict here.  The aroma is more London smog than anything else but the taste is certainly a clash of the sweet and the bitter.  Blackcurrant notes mix with coffee and neither really dominate.  Sweet rich dark berry flavours keep cropping up too but the underlying bitterness keeps holding on.  It is quite moreish and the finish is quite smooth but there is not quite enough body in there to raise it any higher for me and I score it a 7/10. 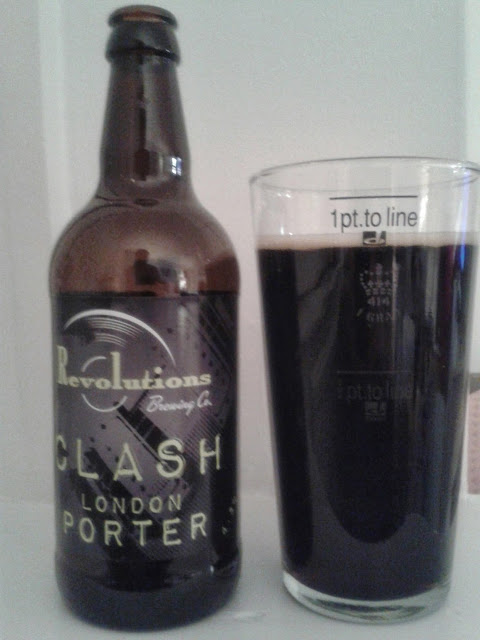 For those of you too young to remember, cassette tapes came in formats C30, C60 and C90.  There was also a C120 too I think but they always broke easily.  This strong stout is part of Revolutions 'C' Series and the strength obviously pays homage to the C60.  The aroma is very smoky but there is also some sweetness there too so I wasn't sure what to expect from the taste.  My wife tried it first as always and 'that's disgusting - smoky bacon crisps and stale ashtrays' was the comment.  Interesting.  It was certainly quite smoky and bitter to begin with but the sweetness did kick in and the flavours soon smoothed themselves out.  The bitterness was more coffee than tobacco though and it did disperse to leave quite a smooth stout with plum, rasin and vanilla notes joining the party.  The sweetness seeps slowly into the fray and by the end the bitter coffee start is nearly forgotten about.  It is interesting how that first sip can be so misleading.  This is a difficult one to mark and it is very close to my bronze award but not quite there so it also gets a 7/10. 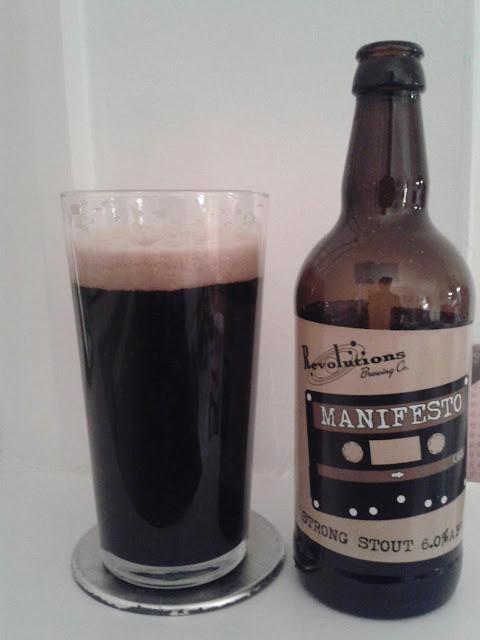 My final mark is for the branding.  I love the retro theme with the musical references and being from that era probably helps with me.  The logo is cool and their slogan 'Love Music :  Love Beer' is simple and effective.  I'm not sure how restrictive it is having only certain beer strengths and from their website there is a distinct dominance of 4.5% ABV beers and I would like to see one or two 7.8% ABV beers in there.  It is great branding though and my overall mark in this category is 8/10.

My 'Come Drink With Me' Yorkshire Ales fest is off and running and Revolutions Brewing Company post a score of 28/40.  Coming up next week we have three from Axholme Brewing Company.